In this interesting interview with Tracey Dockree she talks to us about her passion for helping and exposing people in marginalisation and abuse situations. She suggests this has been a main inspiration for her whilst designing and making her collection that she will be showcasing on this years Zeitgeist Catwalk this Friday 16th October!

The main inspiration, though, was a pile of old socks and I felt challenged to create something desirable out of them. It occurred to me that socks are the bottom of the social ladder of clothing. 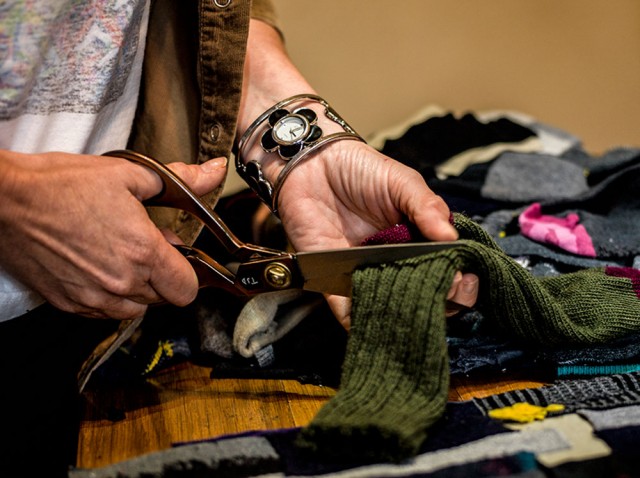 BFW: What made you decide to become a designer?

TD: I struggled to find any clothing that excited me or that I wanted to wear. There just wasn't anything out there for people like me.

BFW: What gave you the inspiration to base your designs on marginalisation and abuse?

TD: A lot of people avoid the homeless and dismiss them as worthless. I've seen first-hand how much they look after each other. It's a really tough life for them on the streets. Not only do they have to deal with being out in the cold and the rain, they have to deal with being shunned by everyone and regularly attacked by mindless thugs. Once they're homeless it takes years for them to be re-homed, if at all. Most die, 30 years younger than average, on the streets. And the number of people sleeping rough is increasing. The statistics are staggering - over 75,000 young people aged 16-24 are homeless. And that's just in the UK.
Then, there's the number of people duped into slavery - even here in the UK. In 2014 slavery increased by 22% in the UK, and the number of children trafficked for sexual exploitation increased by 300%. That's just the ones that are known about. It's estimated that every Londoner is no more than 2 miles away from a slave - domestic slavery, sex slavery, men slavery; working in the fields and factories, and child slavery in restaurants and cafes.
This is just what's going on under our noses and in our neighbourhoods. There are millions of women all over the world forced out onto the streets when their husbands die, with little choice other than to beg for food or sell themselves.

Governments are making some changes but as a society we need to do so much more. Fashion is something that has global appeal so it's an obvious way for me. As a fashion designer I can create an impact - even if it's only to get people thinking and talking about these issues.

BFW: When did your up-cycling start or have your designs always been sustainable?

TD: I've always liked the idea of giving new life to something whose purpose has come to an end; especially when it results in an unexpected re-birthing.

I started using old fabrics and scraps when I first started sewing but it all stepped up a gear when I started experimenting with textiles at Falmouth University: creating lacy fabrics from old carrier bags; rust dyes and prints from scrap metal; and new fabrics from old socks.

BFW: What does sustainable fashion mean to you?

TD: 'Sustainable' is one of those words that implies something important but is difficult to give an exact meaning to. For me, sustainable is a process that, in balance, doesn't result in a reduction in the world's bank of natural resources. As a minimum that means that products need to be either re-useable or able to generate a new product. The ideal would be a procreative process that produces more resources than it consumes.

BFW: Where do you find your discarded clothing?

TD: It's not particularly easy to acquire discarded clothing anymore as most of it gets locked into being ragged or sold to the Third World. I put out an appeal on Facebook and Freecycle and quite a few people responded to that. A few local charity shops allowed me to sort through clothes they couldn't sell and I made sure I gave them a donation greater than they would have received from ragging.

BFW: What's your favourite piece from this collection?

TD: That's really difficult! Each outfit has its own personality and story so I feel deeply attached to all of them. The outfit that makes me smile most is the hoody with the heavy rib shoulders and t-shirt panels on the body - I think it's the most light-hearted one of all of them.

BFW: Are there any current designers or things that have given you inspiration for this collection?

TD: The designers who've had the biggest influence on my work are Prophetik, Gary Harvey and Orsola de Castro, but the designer with the biggest inspiration for this collection would be the legendary Junya Watanabe.

The main inspiration, though, was a pile of old socks and I felt challenged to create something desirable out of them. It occurred to me that socks are the bottom of the social ladder of clothing. There are people at the bottom of society's social ladder, those who have been written off, or even written themselves off, who have value - and not in the slave-trade sense.

BFW: How does this collection compare to previous ones?

This collection is a lot darker and more out there than earlier collections. It is definitely more edgy, probably because of the message I wanted it to get across.

BFW: Are you trying to design for a particular target market, if so, what would you say is your demographic?

For this collection I took a huge gamble and decided to ignore the customer. I don't think this collection would have been made if it had been customer-orientated. Usually, though, my favourite customers are women of character who wear edgy, exciting fashion and have a confidence that grows rather than diminishes with age.

BFW: What are your plans for the future after Brighton Fashion Week?

TD: I've learnt that the best things that happen in life aren't planned, but I am starting research for my next collection and developing the Parade of Giants catalogue as a documentary novel. We have a lot of fashion talent in Cornwall so I'm also setting up a database of designers, makers, textile artists and producers in Cornwall to facilitate the production of 100% Made in Cornwall fashion and to support those in the fashion industry there.

Tracey Dockree will be showcasing her collection on the Zeitgeist Catwalk on Friday 16th October.