After Thursday night’s Zeitgeist Show, Brighton Fashion Week’s trio of follow-up shows had some high standards to meet to sustain the quality of the opening catwalk spectacle. And Sustain that it certainly did. The first show dedicated to sustainable fashion in Brighton was an assortment of contemporary sportswear, elegant evening gowns and youthful, feminine ready-to-wear from students and graduates to established designers. But not only did the Sustain Show highlight a wealth of talent from these designers, it also pushed the concept of eco-friendly fashion forward, proving that sustainable clothing doesn’t need to be a tie-dyed amalgamation of hemp and past-their-sell-by-date charity shop purchases. In fact, it was the opening designer; Rebecca Jayne Taylor that proved that eco-fashion doesn’t need to be the serious, drab concept we assume it to be. 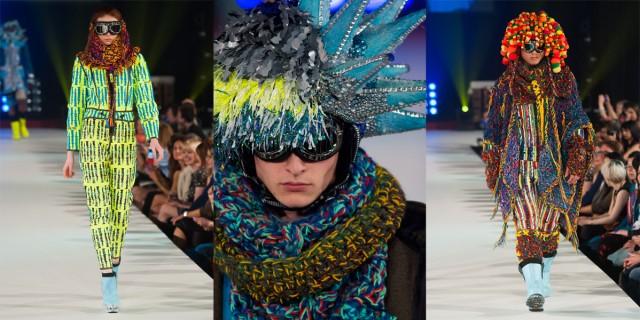 Rebecca Jayne Taylor’s colourful collection was the perfect explosive opener for the show. As a Falmouth University graduate (not unlike several of the other designers in the show, as well as this here blogger), Rebecca’s background is in sportswear, and this was a clear thread within her collection last night, with many of the outfits looking as though they’d fit right in at a rave in a skiing resort. Rebecca’s work had all the shapes and components of a Winter collection, with the colour and playfulness of Summer, but it was the embellishment of the accessories, styling and over all presentation of her work that helped sky rocket her to emerging as one of the strongest presentations of the evening. Whether I could pull off crystal embellished ski boots or Mohawk helmets is questionable but I’d be willing to give it a try if the models this evening were anything to go by! 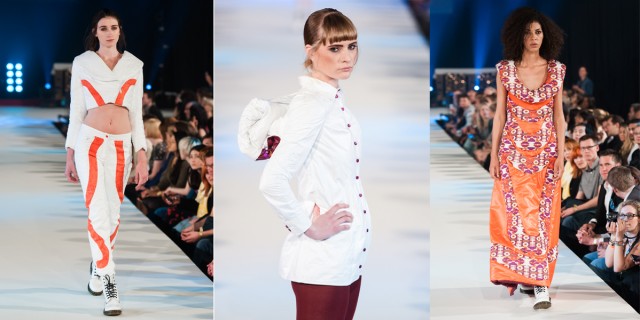 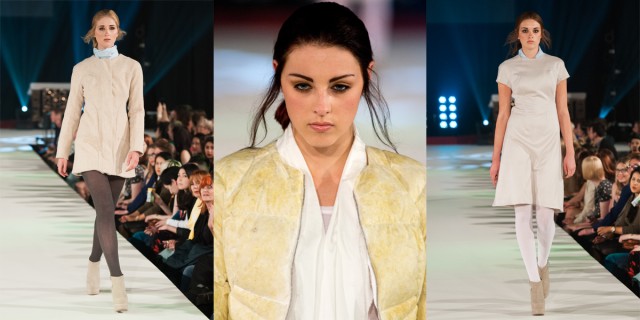 George May - images by Gareth Gregg and Tanay Sharma

There were several trends, but two standout themes to the Sustain Show, and Rebecca was a great representation of the first, which was a strong focus on wintertime sportswear. Designers such as Anna Bykova, George May and Liora Lassalle all focused on winter and sportswear, either opting for quilted pieces (such as Anna Bykova’s innovative and technical collection, and George May’s short but sweetly simplistic trio of looks) or bursts of neon colour (as demonstrated beautifully by Liora Lassalle whose heavily sportswear influenced collection fused an array of interesting materials together). 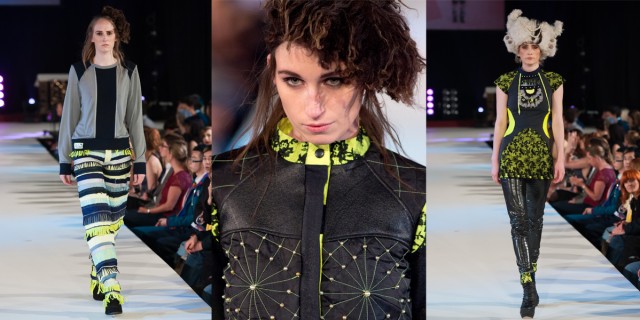 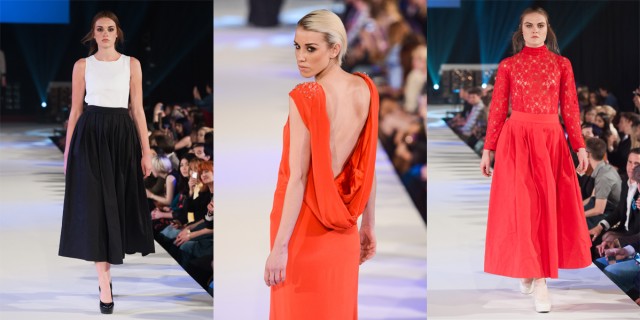 The second main theme of the evening was in fact just that; Eveningwear. Samantha-Jane Agbontaen, AKA Fabryan followed Rebecca Jane Taylor's eccentric opening collection. Samantha-Jane’s collection was elegant and sophisticated and entirely wearable, which is a word sometimes forgotten in contemporary fashion design (not necessarily a negative thing). Her designs were intelligent, especially the length of her skirts, and the simple colour palette of black, white and red. There was nothing in her collection to be taken as showmanship, instead we were presented with work that is honest and desirable. Designers like Samantha-Jane highlight the potential for expensive looking sustainable clothing, and this simplicity and wearability was continued by the likes of Anja Crabb and Sustain headliner Henrietta Ludgate. 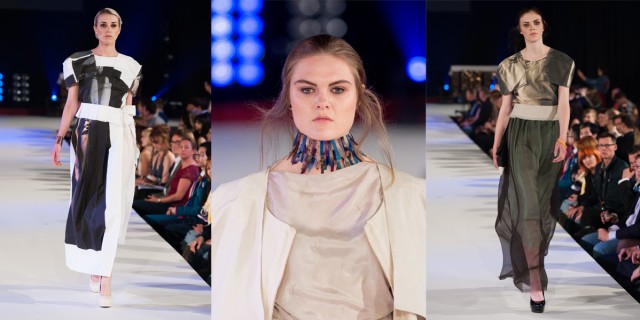 Anja Crabb presented a collection of delicate colours, simple materials and innovative shapes. Appearing to have photographed dresses or material and printed them onto the fabric for the pieces, Anja’s collection may have been at times minimalist, but this certainly didn’t mean it lacked depth. In many ways, Anja was one of the designers, along with Daisy H-B, Emma Burniston and Brandy Nicole Easter, to give sustainable fashion a light-hearted and playful touch. 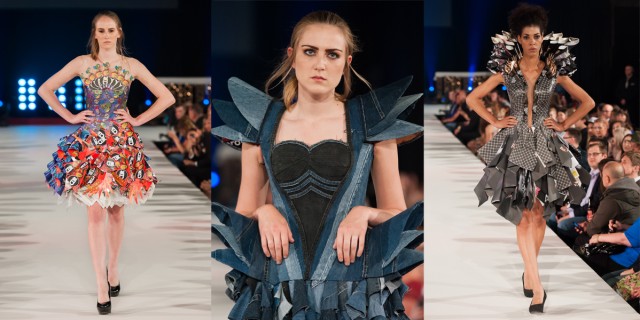 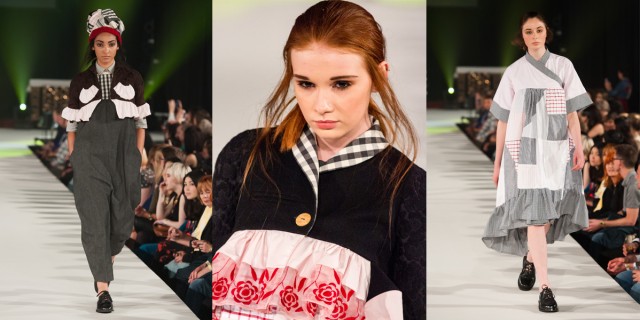 Second half opener, Daisy HB AKA Dumpster Design, took a rather clever approach to recycling. Several of the designers in last night’s show used paper materials and unconventional materials, however, the Dumpster Design collection definitely couldn’t have shown anywhere other than Brighton Fashion Week. Why? Because it was made out of Brighton Fashion Week! Daisy created her dressed based on the event sponsors and PR, using BFW13 leaflets, Cult PR cut outs, Benefit make-up logos and Electric Hair imagery to create dresses, making for an entertaining and relevant collection, though perhaps one that you might need to dry-clean rather than machine wash.

Emma Burniston, with her use of large silhouettes, varying types of check patterns and ragdoll inspired workwear, provoked quaint thoughts of very early 20th Century children having a summertime picnic in the park, and Brandy Nicole Easter’s use of cat prints, interesting angles and panels of pale purple also gave off an innocent and childlike vibe that surely melted a few hearts in the audience last night. 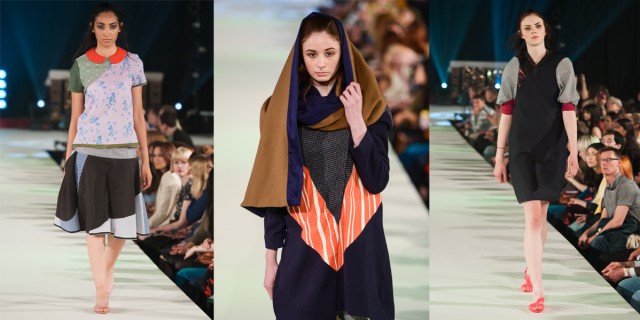 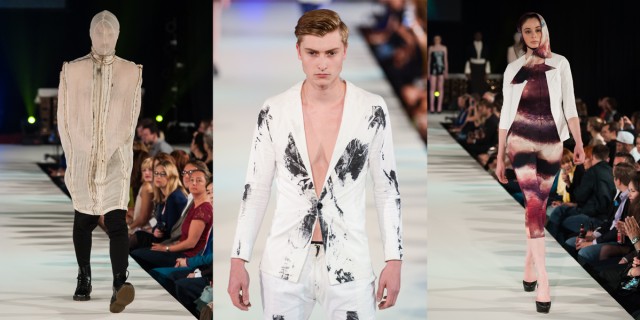 It was, however, the last two designers of the evening that took my fancy most (along with the opener Rebecca Jayne Taylor). Of course Jack Kindred-Boothby (again, a fellow Falmouth representative) would be a personal favourite of mine; he opted for menswear as well as women’s, but this wasn’t the only reason. Jack’s collection was completely un-comparable with any other designer’s in last night’s show; the second the soundtrack switched to punchy aggressive punk, and the first male model stormed out at a heightened pace in a rather unnerving full body straight-jacket, of sorts, the audience knew they were about to see a collection with fire and fury. Jack’s use of prints (reminiscent of layered volcanic rock or the patterns of Jupiter’s surface) and burnt edges provoked both images of Shakespearean peasants and futuristic lizard people, but at all times there was a feeling of characterisation and storytelling. 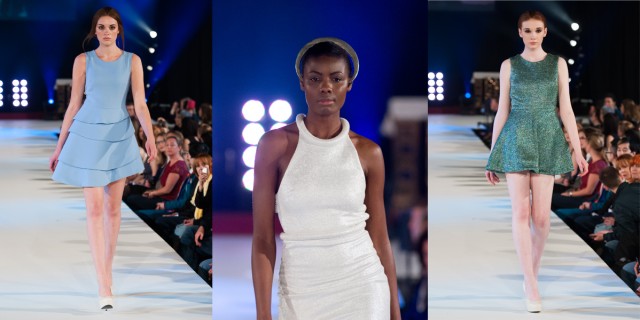 After Jack’s burst of dark energy, came the Sustain headlining designer, Henrietta Ludgate. Opting for simple and elegant design, with skirts ending above the knee and outfits of often just one or two colours at most, Henrietta’s collection was not only expensive looking and very desirable, but also impeccably crafted and at times inclusive of the most beautiful materials. A couple of shimmering dresses in pale blue and silver were personal highlights, as well as simple black dresses with slashed and crosshatched line prints in silver and grey. Henrietta understands the beauty of a dress without garish embellishments, her work is understated and completely wearable, and yet the message that her clothes put across is admirable and entirely relevant to where the fashion industry is headed. That was the message of the whole evening in fact, and yet we were presented with 11 designers that couldn’t have been any more eccentric and varied. But then again, there’s no reason why the application of ethics to fashion should hinder creativity or craftsmanship. 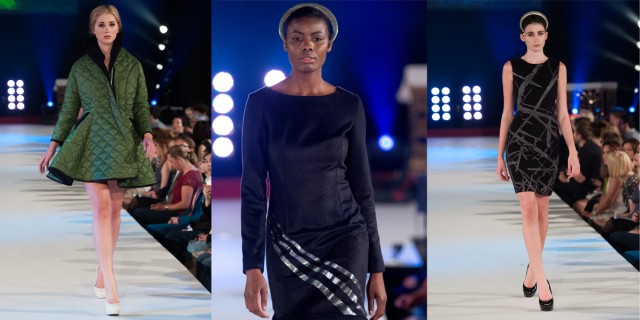