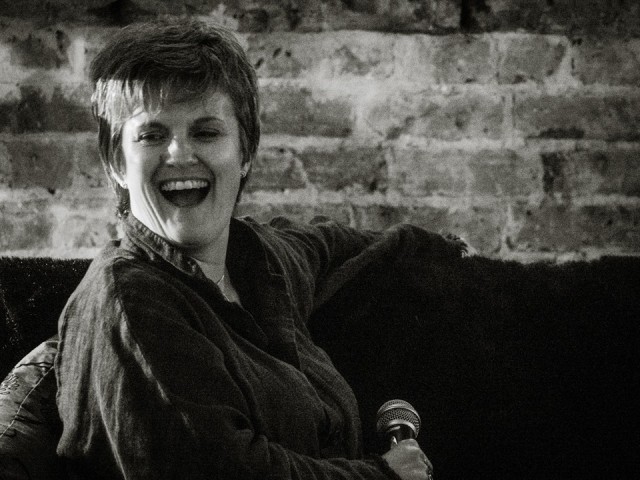 Hosted by Lisa Holloway, guests were seated by candlelight in Emporium's sophisticated surroundings ready for Simone Marie Butler to take to the sofa. Lisa launched into a recent review of Simone on stage with 'The Scream', reading; 'I was quite impressed: a damn good bass guitarist, natural born good looks and… very ‘rock’n roll’ sexy'. After all, the musician is named after Elvis' daughter Lisa Marie. First impressions show all of the above to be true, with Butler kitted out in ubiquitous heeled boots, tight black jeans, black leather jacket and even blacker eyeshadow. What strikes me is Butler's socks - black and white stripes. Somehow, we picture musicians as carefree, exempt from the everyday. But even the bassist with one of the biggest rock bands in history needs to grab some socks every now and then. This is something Butler picks up on herself when discussing the perhaps surreal situation she now finds herself in:

'I wasn't too nervous going in, I'd met a few members of the band a few times already. I always followed them, and then heard they needed a bass player. When I got the call from Bobby, I thought it was one of my friends pulling a prank. Although they auditioned a lot of people, including Peter Hook from Joy Division/ New Order, I think they liked that I was relatively unknown. They took a chance on me'.

When asked about whether joining the group changed current dynamics with friends, Butler diplomatically replied that she still had all her good friends, and now has even more. 'You can quite quickly see who's in it for the wrong reasons' she says, naming no names. Butler, though, is clearly in it for the love of the music. With her Dad playing in The Honeycombs, music was 'not exotic' to Butler's early life. A first classical violinist from the age of 12, Butler then graduated to the bass after finding the standard guitar didn't give her the 'rhythm' she desired. Starting a job at a bass shop in London's Denmark Street, Tin Pan Alley, Butler's aim was initially to meet hot guitarists, but just wanted a job where she could practice all day. Butler also worked, and still does both live and through Soho Radio, as a DJ, hoping to 'elevate the energy' of club-goers and 'educate the crowd, but not in a holier-than-thou way'. With a serious amount of bands and experience behind her, Butler's acclaim is well-deserved. 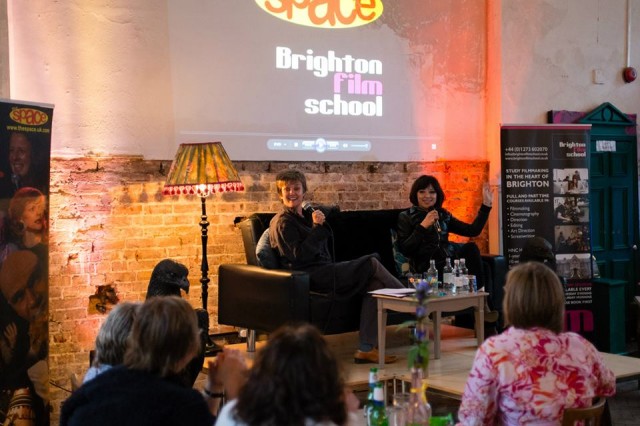 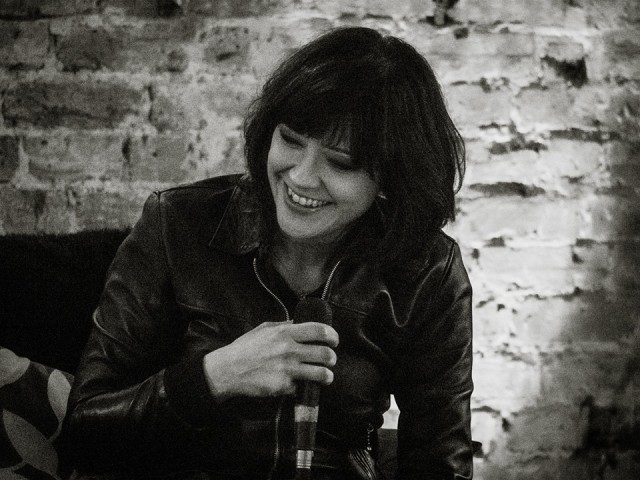 Next up, chic Jany Temime with all her French charm. This section of the evening began with a montage of Temime's past work, including Bridget Jones, the final six Harry Potter films, Skyfall, Children of Men, Wrath of the Titans, Gravity and In Bruges. Temime admits that she rarely watches the films back after her work is done, always noticing the mistakes in her costumes - no, she wouldn't give any examples, but elaborates by stating 'you always feel like you could have done better. It's not necessarily making huge mistakes or doing things better, but just doing things differently. With maturity, your decisions change'. When asked about costumes she is particularly proud of, Temime cites the Harry Potter characters as her greatest achievements. He Who Shall Not Be Named, a green rather than black devil wearing three different types of silk each chosen to move best when standing, walking and running, plus the one and only Harry Potter.

'I told them I would only do the job if Harry could be a normal teenager in dirty jeans, a dirty t-shirt because his Mum hasn't washed it, a dirty coat... a real teenager who just happened to be a wizard'.

Another proud moment is Bridget Jones donning her matching Christmas jumper with Colin Firth. Renee Zellweger was apparently less than comfortable in her every-woman outfits, so much so that Temime was only able to convince her to wear them and feel marginally good about herself if then-boyfriend Jack White told his girlfriend that she looked beautiful. Temime claims that she knows a good actor in five minutes, judging by the way they bring the costume and character to life. 'Costumes enable an actor. Anyone can design a dress, but costume design is about more than that, you need to make sure the character is well designed and bring people to life'. Falling into film work after studying French Literature and Art History, Temime credits her degree wih enabling her to read into and understand a character through a script. Similarly, Daniel Craig's art school background means he is vocal in his costume choices, always making suggestions and bringing ideas. 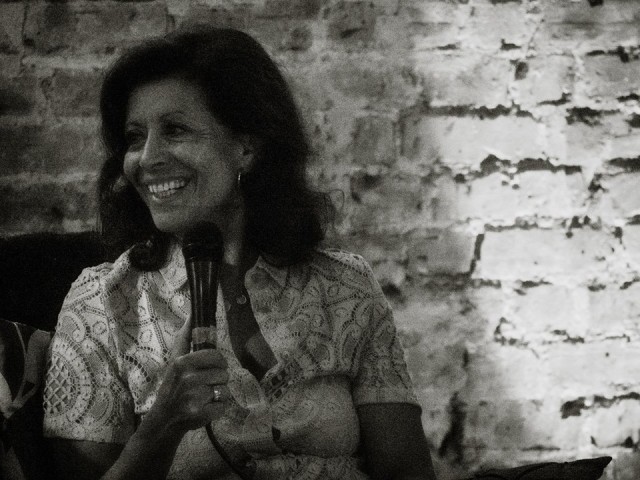 With Hercules and Frankenstein set to come out over the next year or so, Temime claims 'working on a film is like a birth - you're happy when it's finished. Everything teaches you something, and it's great to see younger people also learning. Whereas it was easier for us, young people today have to fight so much more for their dream job'. Tales of the 60 Tom Ford suits made one James Bond scene, with different length legs for running, cycling and walking, the 60, 000 Swarovski crystal dress seen on Berenice Marlohe, Wrath of the Titans armour\, Children of Men costumes in various states of distress and having to design Gravity costumes in 3D without knowing the leads show Temime's vast experience. Research, she says, is the easy part; it's making her ideas practical, wearable and washable that is the real task.

To end, Temime quite rightly asserts that nobody is interested in a story that isn't realistic. In response to whether costumes have a place on the catwalk, as with our ShowReel show, Temime agrees that a story is what  gives a costume its salience. But fashion shows, she continues, 'do too have a story - the theme, the lighting, the audience, the ambience...there is a strong story there'.

We can't wait for the next SPACE story.

Brighton Fashion Week was invited along to see the final projects of the Fashion and Textiles department at City College, Brighton. Our Head of Sustainability, Siobhan Wilson, went along to City College and interviewed two students, Florence Hutching...

You’ve seen Savage Beauty, but the McQueen mania doesn’t stop there. Isabella Silvers and Victoria Farley review three other exhibitions that give a glimpse into the designer’s fascinating world....