Patrizia Ruthensteiner is not just a designer. Experimenting with different mediums, Patrizia uses objects and constructions to develop a choreography in her work, testing the relationship between stage design and costume. Victoria Farley speaks to Patrizia ahead of her ShowReel showcase on October 12th. 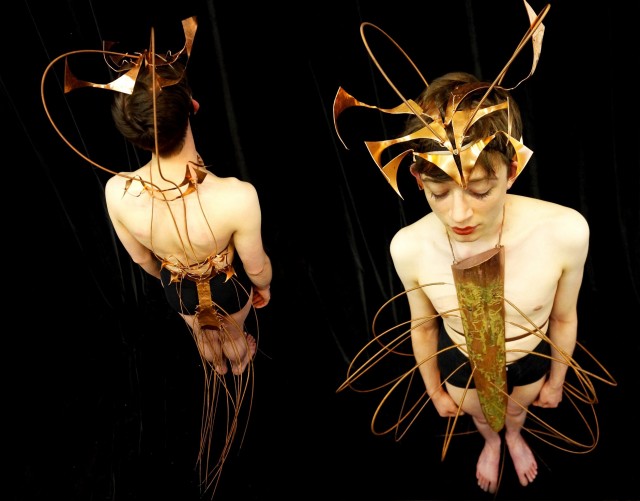 Your work concentrates on the relationship between everyday fashion and stage costumes - how do you express that idea in your designs, and what does it mean to you?

My work concentrates on the relationship between everyday life and stage - I am not so interested in everyday fashion, but more in the theatrical aspect of human behaviour. The costumes are my medium to express that. Through my costumes, I intensify the features of such characters until they become otherworldly, to point out their animalistic desires until they become animals, and their greed until they become objects.

Living in in Vienna and studying at the Academy of Fine Arts, how do you think the city's vast history of music and art has changed your designs and ideas?

Because I've lived in Vienna most of my life, it's hard for me to truly understand the actual cultural surroundings I'm in. I've been born into this city, and haven't lived abroad yet. The 'vast history of music and art' you mention, which people from abroad are immediately aware of and sensitive about, is maybe a little different to me, since I grew up here - it might be like the water that David Foster Wallace's fish didn't know. Vienna is surely an interesting town to be testing and stretching the borders of stage and non-stage, official and private, walking untrodden catwalks. We have many places here that are perfectly and beautifully manicured, and strictly forbidden to step in. Presented through a parallel universe of societal misgivings, my work aims to be a persiflage of life, mocking its participants, allegorising and displaying and their vice and virtue.

I've read that you aim to invite the wearers of your designs to interact with the clothes, rather than just wear them. How do you express that aim in your designs?

I do not think a lot about how I can express that, as this inherent principle is already determined through the construction of the pieces. These costumes are not actual clothes, they are more like wearable objects and constructions that have a certain function and determine a possible way of movement and therefore a potential choreography. Some of them invite or even force the wearer to move a certain way. For excample, I have transformed an old spinning wheel into a construction that will make the wearer able to walk on their hands. This is especially interesting because a spinning wheel is an actual instrument to make clothes. One of my closest friends who put on one of my costumes for a photoshoot was joking around that the models must have absolved military service. 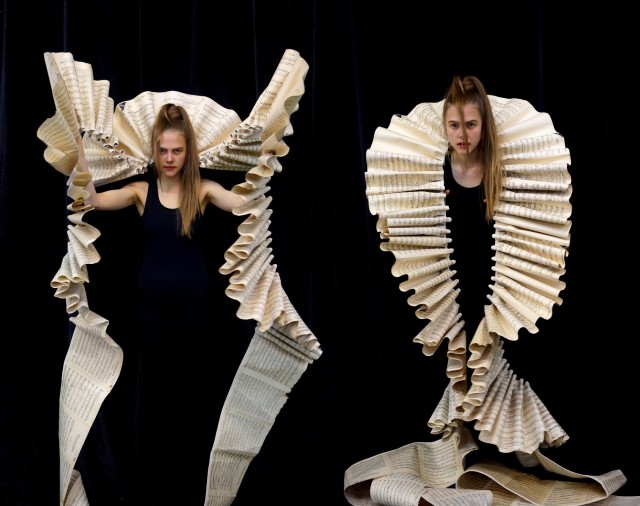 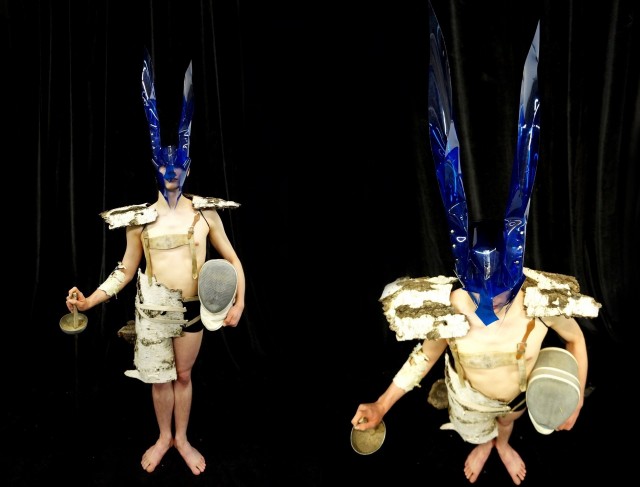 Can you describe the process that goes behind creating your ideas?

On the one hand, it can either be a vision, an image or idea that I cannot explain as it is in my mind, and I can not let go until it has materialized. I am often directly inspired by materials/objects, and my brain is automatically doing three things: putting them into another context, making it wearable, and extending it. I have found most of the materials and often unique anachronistic objects I am working with during a trip or adventure, or a special encounter, which says a lot about my personal life practice and way of producing art. My working practice is also bound to time and duration - some of the materials must be worked up right away, others will force me to wait and collect them over a longer period, sometimes years.

When I use cones that would only come from one tree, I am not the one to decide when to continue working. It might be possible after the next storm when they drop on the floor the costume can extend. Within a longer duration it theoretically it could grow endlessly. For another costume, I have combined the bone fragments from about five different deers I have collected over several years. Another costume is an old oil lamp from the fleamarket, combined with the small crown from a sacred Holy Mary statue. I combined it with the seeds of the acorn tree. It is all golden and remembers me of those traditional bridal crowns. I have also included a mechanism so that the crown can rotate and react on the movement of the person wearing it.

The awareness of the fact that the passage of time will allow your work to rise and become holistic/complete liberates you from worldly concerns of having something done right away, working under duress and continuous the pressure of having an output. One aspect that is truly unfashionable about my work is that the objects I use are loaded with the past. Everything that surrounds us is manifestly loaded and influences our way of thinking, our behaviour. It is important to illustrate that.

Your BFW collection endeavours to evoke a new era of hybrid existences, between concepts such as man and animal, nature and culture, future and past and subject and object. How did those ideas come about, and how important do you believe that the marriages of concepts such as those are?

It is my attempt to reverse the established idea of 'natural order' as a universal truth. Through the use of materials from the natural world and animal symbolism, but also transforming anachronistic objects into costumes my works are wearable statements about the classification of humans, plants, animals, or inanimate objects, and their respective hierarchy in our world. Much too seldom we do ask the question why something is on a certain place and see all of those things we have only constructed within a long process as a matter of course. This is my way of questioning all things that are taken for garanted. Such as the status of human and the status of every single element in an order of precedence that is defined through human perception.

Transporting such messages through the extremely standardised fashion world and presenting my work on a fashion catwalk could be seen as a subversive act to transform the established structures and a trial by which the values and principles of that system are contradicted. 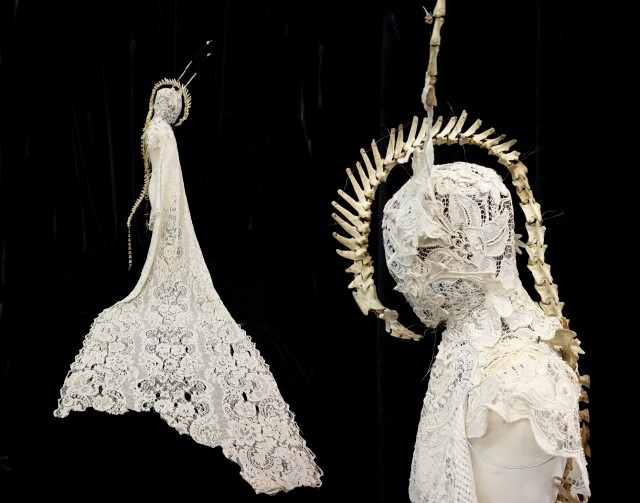 Can you give us a preview of what we can expect to see at your show?

There might be fairly a lot to see, but it will also be worth listening, as I have collaborated with the Electroacoustic Composer, Soundartist and musican Tobias Leibetseder, who did an amazing job making all the sounds for my show. The sounds are an essential aspect of the whole thing. Nearly all of them come directly from the materials the costumes are made of and they co-determine the choreography. I have collaborated with Tobias Leibesetner who did an amazing job making the sounds for my show.

What does the future hold for Patrizia Ruthensteiner?

Although I don´t think too much about the future right now and live in the present I am pretty curious. The only thing that comes to my mind right now is that I hope to be able to continue working across many different fields.

See Patrizia's show at ShowReel on Sunday 12th October. Buy tickets for the 6pm show here or 8.30pm here. See the rest of the schedule here.