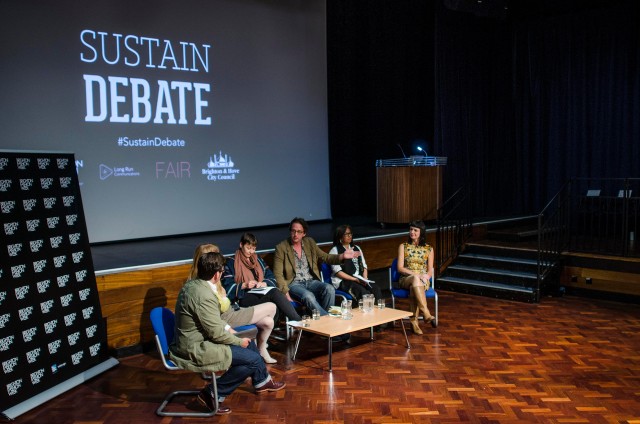 The debate on the ethics of fashion has reached a critical point. Since the catastrophe of Rana Plaza – an eight story building containing several clothing factories, which collapsed on April 24th 2013, injuring nearly 2500 of its garment workers, killing 1132 – there has been a clear desire for change. This desire was encapsulated today by a panel working toward a brighter and more transparent future for the fashion industry.

Perhaps the most notable issue that arose from the debate is that of transparency; the consumer is usually far from aware of the story behind the clothes they buy. It seemed apt, therefore, that things kicked off with a performance from Izzie Roffe-Silvester, author of the Material Fiction stories. She pointed out that, although the label of the item may say ‘Made in China’, this is actually inaccurate. It condenses an ultimately complex process into one of forced simplicity – a plain T-shirt, for example, may originate in a Texan cotton Plantation, before travelling across the globe to be finally sewn and formed in a Chinese clothing factory.

After the performance, the panel made their first appearance. They included: Carry Somers of Fashion Revolution; Purna Sen, former Head of Human Rights at the Commonwealth Secretariat; Ben Ramsden, creator of Pants to Poverty; Caroline Lucas, Green Party MP for Brighton Pavilion and, finally, Tamsin Lejeune, the managing director and founder of the Ethical Fashion Forum. Each member of the panel agreed that there needs to be more awareness of how our clothes made; how they go from being a part of nature, to be becoming a man made item that forms a basis to our everyday life. 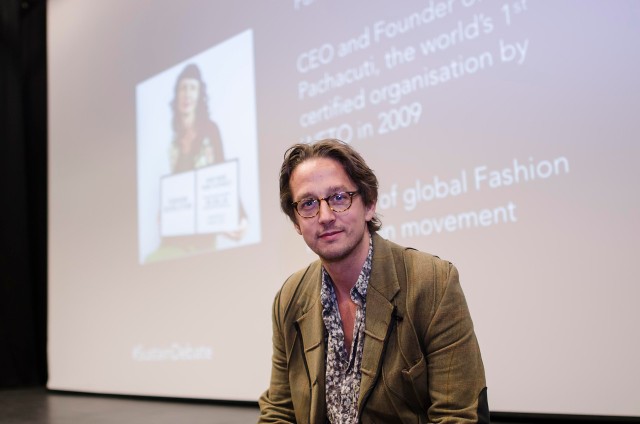 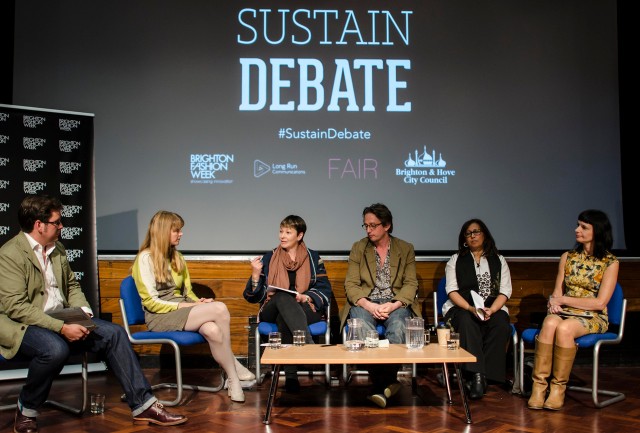 Ben Ramsden brought up the fact that fashion gives a sense of identity, but the industry itself is hollow and lacks depth. There is no significant relationship between the person who makes the clothes and the people who then wear them on their backs. It is disconnected. If there were a greater level of care and interest in the creators of garments, if they had more of a voice, maybe the consumer would think more about where their clothes came from. Who made them? What were the conditions like? Are they being paid a fair wage?

The idea of a fair wage, according to Caroline Lucas, is something that needs to change immediately. People working in the textile industry are paid a pittance for the benefit of cheap, throw-away fashion, and things are not moving in the right direction at a fast enough pace. Lucas argues that there needs to be Government legislation that ensures people making the clothes we see in the high street chains are being paid a living wage and working in safe conditions.

But cheap fashion has really taken hold of society. As Carry Somers pointed out in the debate, our western social environment makes us feel as though we need to be constantly shopping in order to feel satisfied. But if we were to reconnect with the wider community of fashion, we’d realise how it is more than just clothes – it’s an employer. There needs to be a voice given to these workers, which Carry hopes to help with through her ‘Meet Your Maker’ blog on the Fashion Revolution website. 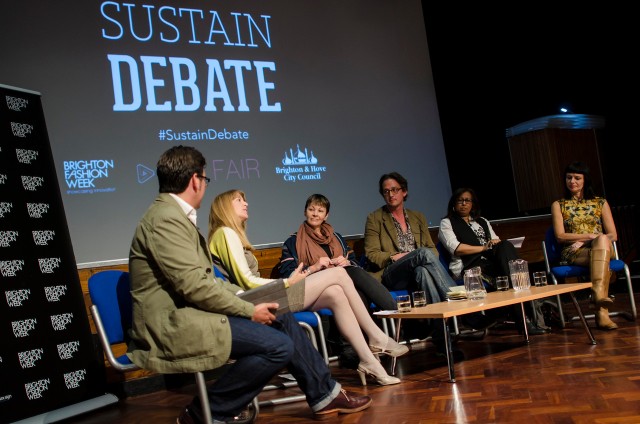 Although cheap fashion is a problem, cures for the issue are difficult to source. Lucas states that, in Britain, the poor are getting poorer and, therefore, cheap fashion distributors, like Primark, are thriving. In order to create significant change, governments need to mobilize and sustainability needs to be put at the heart of businesses. Wages on both sides of the globe need to be sufficiently fair so that the cycle of poverty ceases to continue. But ultimately, we have the power of the consumer. We choose what buy and we pay for our purchases. As Ramsden put it at the close of the debate, we shouldn’t wait to ask for the change we want, we should endeavour to create it ourselves.

The Sustain Debate was sponsored by Brighton and Hove Fair Trade Steering Group and The FAIR Shop, run by Long Run Communications.