Orsola De Castro: Why do we need a Fashion Revolution? 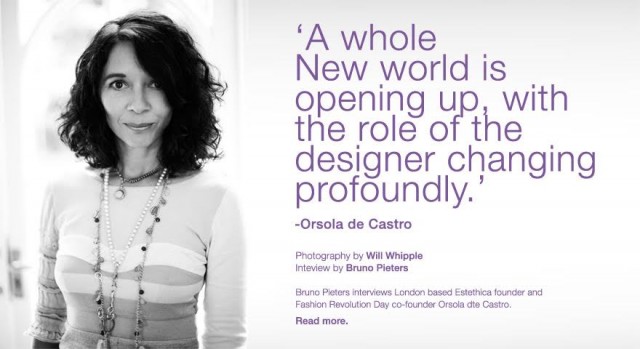 This question was raised by Orsola De Castro after the tragic ‘accident’ of a textiles factory collapsing in Dhaka, Bangladesh in April 2013. This resulted in 1133 deaths and a further 2500 injured. After speculation, it was revealed the factory workers had repeatedly complained about the poor wall maintenance for months before the collapse. The owners claimed they refused repair due to the mass loss of profit they were undertaking, caused by Western retailer’s pressures to reduce sale prices. Some of these stores included Primark, Matalan and Benetton.
This is just one example of how the fashion industry exploits the less developed countries. This case was heavily medialized but really similar events to this are happening everyday all the over the world, mostly involving every other Western retailers on the mainstream market.

Despite hearing these statistics we feel so removed from the people that produce our clothes that the impact of this and other tragedies doesn’t even hit home.
Fashion Revolution is a campaign set up to inspire, educate and question consumers to buy more ethical and sustainable fashions. ‘Where were your clothes made?’ By confronting this question we should be able to help expose unethical businesses.

Over 70 countries are already part of this campaign but we need to carry on expanding!
Orsola De Castro will be hosting a talk on ‘Fashion Revolution’ for Brighton Fashion Week on the 16th October. This will be held at the University Of Brighton Sallise Theatre.
This event will not just be inspirational but you will also hear about her new ‘Reclaim To Wear’ collection which lead to collaborations with Topshop as well projects with Central St Martins and the Hong Kong Design Institute.
You’ll also get a chance to hear about her own label, ‘From Somewhere,’ which she founded alongside Filippo Ricci. This label ‘works primarily with pre-consumer suppliers from the manufacturing houses and textiles mills of the luxury fashion industry,’ so you have quality and style as well as sustainability.
In Orsola De Castro recent interview she was asked her favourite quotes. Her reply was ‘In nature, nothing is created and nothing is destroyed, but everything is transformed'- Antoine De Lavoisier. And...."If I don't have any red, I use blue"-Pablo Picasso.
This compliments Orsola De Castro business strategy and outlook on the industry.

This is a unique experience that will help you to be involved with the start of a future change in the fashion industry. Our extreme consumer habits and selfish disregard for the less developed countries is not sustainable, so lets help break away from the mould.

The tickets are available our Brighton Fashion Week's website or you can access them from this link: http://www.eventbrite.com/e/talk-by-co-founder-of-fashion-revolution-orsola-de-castro-tickets-18472434549

We hope to see you there.